After trying an electric bike (e-bike) demo for under a minute at the Lake Monsters Bike Me Out to the Ballgame (a friend had the demo at the time), I knew I would have to give the 3 day demo a shot. I have a 15 mile round trip commute each day and also do lots of local commutes around Burlington. I wanted to test the e-bike on the numerous steep hills and areas where bikes don't have great options. 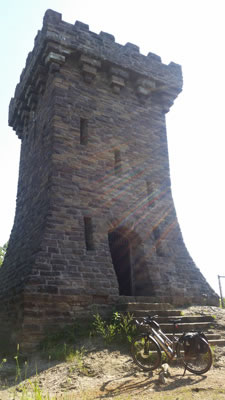 The reservation process was easy. I simply called Skirack and gave them my info and setup the days to demo. When I arrived I signed some simple paperwork, put down a refundable $100 deposit, got a quick tutorial on the e-bike and was on my way. The bike (which is the Specialized Turbo Vado) comes with pannier bags, repair kit, helmet and locks - you don't need to supply any equipment. It also has built in front and rear lights as well as a mirror. The bike is a little heavy and hard to maneuver through a tight doorway but you don't notice the weight when riding (the Specialized Turbo Vado comes with a “walk mode” to make it easier to push the bike).

The first day I took the bike around Burlington to get used to it and test it out before using it on my commute. I cruised up Depot St at about 15mph and got some funny things shouted at me as I cruised past sweating, struggling bikers. Heading out North Ave was enjoyable. Being able to hit 25mph with ease on the flats and not being going full out was nice. The increased speed really helped keep passing cars to a minimum. Next up was the 127 bike path and the big hill up to Manhattan Ave. Again no problem. Down Riverside Ave in the road with no issues. Up Colchester Ave from the bridge to the top of the hill in about a minute.

I also tested it with a full load in the pannier bags and still no issue. The charge held up well at max boost for over 20 miles in Burlington. A few hour recharge during the day at work or overnight and the bike was ready to roll again.

When commuting, the e-bike took 35% off my time and probably 25% less effort which means being less sweaty. The second day in the afternoon it was 92 degrees. Having the e-bike assist at this point was very nice, especially up the hills.

The benefits of the e-bike are many:

Using Skirack's e-bike lending program, I was easily able to clock 50.1 miles in 3 days. I recommend you demo one and see the benefits yourself!

Tags:
Posted in Bicycling Product Features and Reviews By