Electric Bike Me Out to the Ballgame

Last month in July, I had the pleasure of trying Skirack's new electric bike lending program. The program is set up for Vermont residents only where you incorporate an e-bike into your life for 3 days and to see if it is right for you. The Skirack electric bike lending program was super easy to use! I just called the store and a helpful employee set up a reservation for me.

On the day of my reservation, the e-bike was charged up and waiting for me at Skirack's bike shop! The bike (the Specialized Turbo Vado) comes with everything one would need to ride away with including: a lock, helmet, spare tube, battery charger, and panniers. I just had to fill out a waiver and drop the $100 deposit (refunded after successful return), and off I went!

I rode up Maple Street doing 18 miles an hour with a broken metatarsal bone in my right foot, all without breaking a sweat! Later on, I hit the top speed of 28 miles an hour on North Avenue and found that the stress of keeping up with traffic was virtually gone. I found the bike easy to control and essentially the same as a normal bike, but without the effort needed to maintain higher speeds.

The charging process was easy too. I just plugged in the adapter and charged the battery overnight. It only took a couple of hours to charge, but I found it easier to charge it every night so I didn’t have to worry about running out of a charge while on a ride. 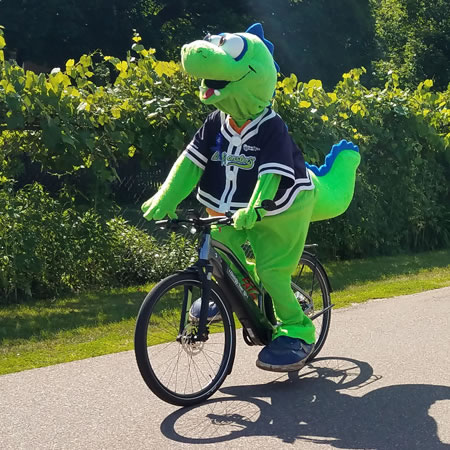 The timing of trying the e-bike lending program was perfect because I had already signed up to lead a group ride to the “Bike Me Out to the Ballgame” event on July 8th to see the Lake Monsters play, Burlington’s minor league baseball team. I met a group of other cyclists and we biked to the game together from The Hannaford’s on North Ave to Centennial Field, the Lake Monsters home stadium. We picked up several groups along the way, including the mascot, Champ - we had quite the bike train! Skirack was a sponsor of the event and they gave Champ an e-bike to ride from the hospital to the game as well as on the field during the game.

The fun part was that every “Bike Me Out to the Ballgame” event pits “Ketchup”, “Mustard”, and “Hot Dog” together for an epic bike race across the field. I was able to race as “Mustard” - and easily won using the e-bike! Skirack got a nice shout out from the announcer that “Mustard won using a Skirack e-bike!” (see the video below).

Since I had broken my metatarsal bone in my right foot a few days before, I could not ride a “normal” bike without being in pain, so using the e-bike allowed me to still participate in the event and ride pain-free (as well as bike to work for the next few days). I would definitely recommend trying an e-bike and participating in the lending program!

Tags:
Posted in Events Bicycling Product Features and Reviews By