Here at Skirack there’s not much that gets us more stoked than skis and winter – I guess you could say it comes with the name. We’ve been selling skis for 5 decades! In recent years, another growing outdoor sport has begun to capture our attention too. If you frequent the shop over summer, you’ve probably noticed our ever growing collection of mountain bikes on the second floor.

Mountain biking is the largest growing summer sport in the northeast and naturally Skirack employees are leading the charge. From events, trail building, group rides, and races - to say we’ve fully embraced Vermont bike culture would be an understatement.

Nevertheless — as temperatures dip into the low 30’s and we start to notice frost in the corners of our shop windows, many of the employees begin to hang up their bikes for the season and turn to their attention to the important stuff: hushed whispers of preseason forecasts, farmers almanacs, and secret snow prayer rituals in the basement. Gradually, the customer needs shift and anything skiing or riding becomes the priority. On November 12th (2018) the air was a buzz with excitement as the first real snowfall meandered it’s way to Stowe before coming to rest above the orange tinged leaves of Mt. Mansfield. Winter had arrived.

When our video guy Zach phoned in to say he’d be out for the morning to shoot some photos on hill we were pumped. We were even more excited when he told us he’d be out the afternoon too, doing a few winter laps on his Santa Cruz Bronson at the Cady Hill bike trails. As any true Vermonter will tell you, work’s not important on the first snow day. So I grabbed a few friends and followed him down Interstate 89.

We arrived at Mansfield just after eight to meet up with one of Zach’s buddies from college. The storm hadn’t disappointed, and as we started up the hill, a few last flurries were finding their bed atop a solid 12 inches of fresh New England powder. It wasn’t the best snow – chunky even by New England pre-season standards, but as the hour-long skin came to a close, conditions had improved drastically. The snow was loose up top and we were ready to get loose too. After a few minutes of taking in the view I peeled off my G3 skins Alpinist skins. It was time for the first run of the year.

At the bottom, we packed up the cars and headed over to Cady Hill forest in Stowe for some mountain biking. There’s something special about closing out one season and starting another one all in the same day and we didn’t want to let the opportunity go to waste.

The ground at Cady was firm with only a light dusting of snow. In fact, it was almost enough to obscure the tracks of a few like minded bikers who must’ve shared our appetite for late season runs. Two hours later, the sun began to dip behind the trees so we decided to head back to the trailhead. The temperature was now creeping back toward 30 degrees, yet there wasn’t a cold one among us. Our mission accomplished, we hopped back on 89 and made the drive up to Burlington listening to 80’s classics while the flurries began to pick back up. It really doesn’t get much better than that.

I’m happy to report all of our mountain bikes are now officially retired for the season. The ski season has begun! 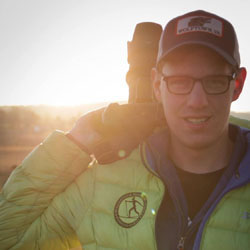 Charlie Kahn is a local videographer and bike guru who’s worked with the Skirack content team since 2017. A Vermont native, Charles stayed in Burlington after college and Co-founded New Atlas Collective, a production company based in Burlington. He’s been a Skirack customer for as long as he can remember.