Maureen "Mo" Beck has never let the fact that she is missing her lower left arm hold her back from climbing. She doesn’t want to be considered a good one-armed climber, or a good female climber…she just wants to be a plain good climber.

Stumped will be screening at Thursday night's show, in which Maureen "Mo" Beck will be attending.

Check out the preview of Stumped:

Maureen ("Mo") Beck was lucky to grow up in the Maine woods scrambling and playing in the dirt. She roped up for the first time at age 12 and hasn’t stopped since. Cragging her way through New England, she developed her potential as a one-handed climber.

Prior to the advent of social media and the Internet, Maureen believed that she was the only differently abled person in the world that climbed. She and her friends invented techniques using a trial and error process, slowly (and sometimes painfully) learning out how to climb one-handed. Just because Maureen went to the school of hard knocks and just because she thought she was the only one-handed climber, doesn't mean others have to have the same experience. She loves introducing differently abled people to climbing.

"If I can connect with someone that might not be aware of what they’re capable of and push them towards trying something new, maybe even a little outside of their comfort zone, then putting myself out there in the world as a resource and a motivator is entirely worth it. One arm? One leg? Blind? In a wheelchair? Bring it on. But will you do me a favor? Being an inspiration doesn't imply action. I want you to take that inspiration, find your courage, and take action. Change your life.”

Now based in the Colorado Front Range, Mo spends her nights training at Earth Treks and her weekends climbing all over the American southwest. She works closely with the adaptive climbing community through Paradox Sports and the Paraclimbing section of USA Climbing and helps manage the Front Range Adaptive Climbing Team. As a competitive climber, she has won four national titles, a gold medal at the 2014 Paraclimbing World Championships in Spain, and defended that title with a gold medal at the 2016 World Championships in Paris.

In addition to climbing, Mo loves gardening, her chickens and dogs, sleeping in cars, and fine Scotch whiskey. 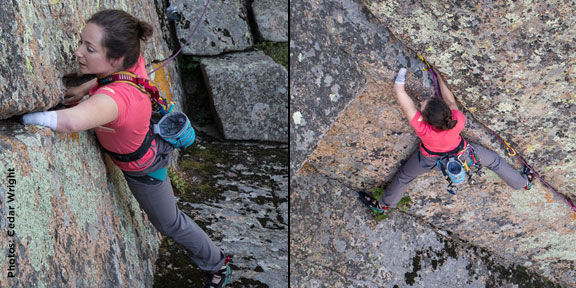