Can you imagine skiing up (and down) 2.5 Million human-powered vertical feet in just one year?

2.5 Million will be screening at Friday night's show, in which Aaron Rice will be attending.

Check out the preview of 2.5 Million:

Aaron grew up in suburban Massachusetts and because of access to the mountains, he began at The University of Vermont in 2008. There, he joined the Outing Club and took courses in backcountry skiing. Each year he skied more and more in the backcountry, leading the backcountry ski program for the outing club for 2 years.

Once out of school and since then, Aaron has quit two well paying jobs to move to Alta for a season each. It was there where he started to travel in avalanche terrain, explore with bigger objectives. In one 6 month season, Aaron earned 400,000 vertical feet, had his first day over 10k, and had his first month over 100k.

The next summer Aaron worked some, but also traveled down to Bariloche, Argentina for three months to ski. He skied Refugio Frey, on glaciers, and on volcanoes. The next winter he went back to Alta for a 3rd season. This was the season of seeing how he could push his body. Skiing Timpanogos, the Hypodermic Needle, countless Superiors, north and south, Little Pine, Tanners, The East Face of the Twins, The NW of the Pfeiff, Boxelder 4 times in a day on multiple occasions, Chipmans, Red Baldy, and many, many more. In addition he attempted a 24 hour long tour. The tour ended up being 25 hours and they skied 21 lines in Days Fork and 24,000 feet of untouched pow! By the end of the season Aaron had a 365 day vertical total of 726,370 feet.

He knew how hard he could push, and just needed the time to stack it all up. In the 2015/2016 season Aaron planned to ski 2.5 Million vertical feet in a full year! 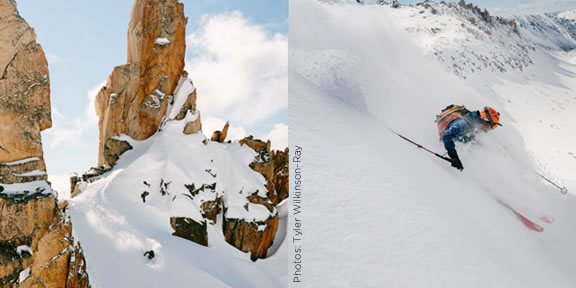