Do not let what you see outside your window deceive you!

Stephen Wright and I previewed the published Craftsbury Marathon Course today and found it to be exceptional!  The conditions were far better than anticipated in Craftsbury.

As we made our way to the venue, we started to hit snow in Morrisville.  One thing to note is that North Wolcott Road is closed due to a washout, but there are plenty of alternative routes.  Plan accordingly.  When we arrived at Craftsbury, we found over an inch of new snow, and that the rain and warm-up did not have a devastating effect on the snowpack.  It still looks like mid-winter in Craftsbury, perhaps not to their standards, but relative to anywhere else there is a lot of snow.  It should be noted that they were not trucking snow, a measure of their confidence in the course.  My take is that they are letting things dry out a little before working the snow.  No questions here, they are the gold standard of snow expertise, and while what we saw was fantastic today, after a couple more days of Craftsbury Magic, we will be in awe of what we find Saturday morning and singing praises at a well-deserved lunch!

Today there was fresh powder on top the granular.  Stephen opted for a short pocket Violet Klister covered with Blue hard wax on Klister skis, I was on my second tier race skis and had a Green Klister Binder with a Violet Hard wax cushion and then Start Oslo Green for Kick.  Both sets of skis were kicking well, but were both slow, though Stephen did have an advantage over me.  We also tested straight up hard wax which in hindsight I would have preferred but found the kick better with the Oslo "Stick Klister."  For Saturday I will have a short pocket of Green Klister Binder and will test for the wax of the day.  I anticipate an abrasive track, and that anything will work so that it will be a matter of preference.  One thing to note is that you should warm the Green Klister and the first layer of what you choose so that it does not shear off.

The course starts in the Lower Stadium climbing to the upper stadium and then head out for a loop around Murphy's field to spread the racers out.  There usual bottlenecks as you leave the Upper Stadium and enter Murphy's field have been improved however the steep pitch at the bottom of Murphy's remains.

After completing Murphy's the course heads out around Duck Pond.  This is a section with a nice rolling flow that works its way back to the Upper Stadium via Round-a-lot and Round-a-bit.  Skiers will loop around the solar panels and then head out to Six Corners and take Upper Baily Hazen to Elinor's Hill.   This stretch is about a mile of downhill to the lowest elevation on the course.  From the bottom of Elinor's, it is almost exactly 5km of stride-able climbing to the highest elevation on the course.  The climb starts out steep at the bottom or Sam's Run but tapers off fairly quickly, and there are little breaks built in.

Just after the junction with Ruthie's Run, the course takes a right and heads over to some trails new to the race.  Crossing Creek Road on Bohens' Connector skiers will be delighted with Bennet's Run and the final push to the highest elevation of the course 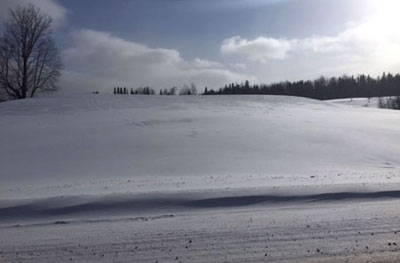 on Dante's Loop.  After cresting the hill on Dante's Loop, a nice downhill brings you back to Creek Road.  This new section on the other side of Creek Road is some fun skiing and reminds me of some of the wooded sections of the point to point course.  The trail is slightly narrower and is a little more technical, but nothing too difficult. Skiers will continue on a new trail called Vivian's Fields.  This is a continuation of the downhill and was a thrill to ski with perfectly cambered corners on a series of sweeping turns.  The course then rejoins Ruthie's Run for the final runout before climbing back to the Start/Lap Area.  From crossing the Bridge on Ruthie's to the Lower stadium is about 2.5km of stepped climbing.

Overall the course flowed very nicely.  There was plenty of great striding. A couple of the sections that took some extra effort to love in the past have been removed.  I have mixed feelings about not having to climb Moss's and Screaming Mimi as I have spent years telling myself those climbs are where I can shine.  It will be nice not to be concerned if my quads will make it over the tops of these on the second and third laps. I am very excited about the conditions on Saturday.  It will be a great day to race and Craftsbury will not disappoint.

Good Luck to everyone. I think this will be a 50KM PR Course!

About Damian Bolduc: Damian is a lifelong Vermonter and endurance sports enthusiast and the director of the local Nordic ski racing club Northwest Vermont Endurance www.nwve.org. He is also a recipient of the Pole-itzer Prize for excellence in ski race reporting and a USATF Level 2 Running Coach (as of 1/1/2018). Damian works in Radiation Oncology in Lebanon, NH and resides in South Burlington with his wife and daughter.

For more information about the Craftsbury Marathon: https://www.craftsbury.com/skiing/marathon/general-information/